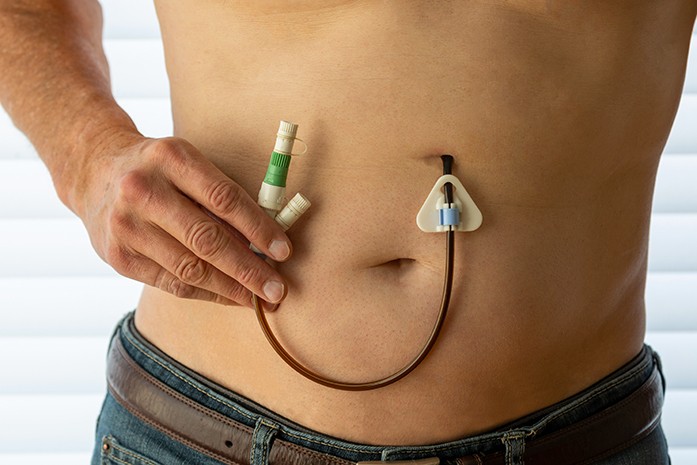 Everything To Know About Peg Tube

PEG or percutaneous endoscopic gastrostomy, is a procedure performed by Gastroenterologist in Islamabad to insert a tube directly inside the stomach for nutrition. This route bypasses the mouth and esophagus, and provides food directly into the stomach. Read on to know more about PEG tube and reasons for its placement:

Who Needs To Get Peg?

PEG procedure involves insertion of the feeding tube directly into the stomach through a hole made there. PEG is generally performed in patients who have pathology of the mouth, esophagus or a swallowing disorder, making feeding difficult or impossible.

Such patients may include those with brain injury, stroke, cancers of head or neck, esophageal cancer and even patients who lose their appetite due to chronic illnesses like cancer. Other chronic disorders in which PEG is beneficial include: dialysis for kidney failure, cystic fibrosis and comatose patients.

How Is Peg Performed?

PEG is performed through endoscopic procedure. Through this procedure, a small incision is made in the upper abdomen and a flexible tube with a camera at the end is inserted through this incision. Thereafter, this tube is connected to the stomach and the wound is bandaged. The entire procedure is painless and take up to half-hour for completion.

What Happens After Peg Placement?

Following the procedure, there is some pain at the wound site as the anesthetic wears off, but it is temporary. The wound site has some drainage that clears after 48 hours. As the wound heals (about five days) the patient is taught how to use the PEG tube and started on enteral nutrition—starting with clear fluids, and progressing to special feeds. Following the procedure, the patient can perform the activities of daily living, normally

PEG tubes are about the size of a pencil. A small part of this tubing is seen outside the body along with a disc called ‘external bumper’ around it. The external bumper keeps the tubing from going deeper into the stomach than needed. At the end of the feeding tube is a plug or a cap that prevents reflux of gastric contents outside the body. This plug is opened to start the feeding and closed thereafter.

Fluids, medication and specialized nutrition are given through the PEG tubing. Depending on the indication for the procedure, the patient may be put on restricted oral intake, such as after a stroke. In some cases, the patient may continue to drink orally, as well.

The patient is taught by the healthcare provider how to clean and cover the tube, along with caring for the wound site. The patient is also shown what to do in case the tubing gets blocked or infected.

What Are The Risks Of Peg?

The risks of PEG tubing include:

Patients are directed to seek the help of the healthcare provider if there is increasing pain, fever, vomiting, aspiration, blockage or dislodging of the tube or bleeding around the wound.

How Long Do Peg Tubes Last?

Depending on the reason they were put in the first place, PEG tubes can last for months and even years. If they need to be placed for a long time, they may be replaced periodically by the gastroenterologist, available at oladoc.com. The PEG tubes are changed easily and do not need sedation or anesthesia for replacement. Firm traction removes the tubing and then a new tube is put in its place. In case the PEG tube is no longer needed, the tube is removed and the opening is allowed to close.